Before my major injury I was a professional athlete, racing and training on the Gold Coast with a professional squad. I had been ranked in the top ten triathletes in Australia and was about to do my first overseas trip on the international circuit. I was to visit my family back home for a few weeks before departing. I was 22 years old.

On the 29th March 1993, I was out training on my bike and was hit from behind by a car. This resulted in a closed-head brain injury and multiple other fractures and abrasions. I was taken to Armidale Hospital Intensive Care unit before being transferred to Tamworth Base Hospital in mid April to start rehab. I was on Ward 11 to start with. I really don’t remember much about that time in Tamworth. I had Post Traumatic Amnesia for 6½ weeks and felt like I was in a “dream state”. I knew what was going on but wasn’t able to engage in it. By this stage I had regained partial sensory control.

I always had the idea that I was just an athlete who was injured and was trying to make a comeback from that injury. I took the attitude that therapy was what I had to do to get back to being an athlete. I wasn’t able to help myself, so I had to go to therapy. I remember working with the physiotherapist, occupational therapist and speech therapist each day. One of my other memories is how hard PTA testing was!

I spent about 3 months in rehab before going back to Armidale as an outpatient. I then spent some more time in Kameruka (Transitional Living Unit) in Tanmworth later that year. Here I was expected to do more things to help myself like cooking my own meals etc. Kameruka provided me with opportunities to be even more independent. Peter (LSA) organised an exercise bike for me to use at Kameruka. I was able to use the hydro pool too. Both of these were important to me being a triathlete. Because I was doing so well I was discharged earlier than expected from Kameruka which was great for my confidence knowing that I had achieved something more in my rehab.

[show_more more=”read more” less=”show less” color=”#0066CC” list=”»”]
I spent a couple of years doing different jobs around the Armidale area. I worked at a sports centre for a while which I had done prior to the accident. This eventually finished up. I found work there more difficult than it used to be when I had worked there before. My workmates just saw me as being back and that nothing was wrong with me. They expected that I was able to take a full workload. Within twelve months of leaving rehab I was working up to 50 hours a week.

A brain injury is often referred to as an invisible wound because to the casual observer, I looked perfectly normal.  But I didn’t feel normal because my brain didn’t function properly.  It was harder to think quickly, to work things out, to do calculations, to move efficiently, to communitcate with other people, to know how I felt and express this effectively.  These weres big things to overcome. My Dad really helped me get through this. It was hard to express how I really felt, and I wondered what people really thought about me.

During that time I was also trying to return to being an athlete. In December 1995, I fell off my bike again and spent more time in hospital. At that point I decided I was going to give triathlons away. The idea of being a professional athlete was no longer reasonable. I came home to Armidale and did a 3-month course at SkillShare (now Jobs Australia), which led to 2 weeks work experience at an local accounting firm Roberts & Morrow. After this I recognised an opportunity for further work within the firm and negotiated a longer contract. I stayed ended up staying there for 4½ years. The job really helped me improve my cognitive skills, gave me a sense of purpose, gave me daily opportunities to relate to others (thus improving my social skills), not to mention a regular income! During that time I decided to return to triathlons as an amateur, with the main goal of competing at the Forster Ironman event in April 1997. I also raced in numerous other events before finally retiring in 2002.

I left the Roberts & Morrow in December 2000. I had heard about a course I could do in Sydney to obtain basic qualifications in Personal Training. I completed the course in May 2001 and then started my own business as a Personal Trainer. Since this time I have been working at The Armidale School (TAS) – I started with 3 hours a week doing gym instructing, which has grown to 15 hours a week. I now run classes for students, adults and the aged. In October 2001 I started at the Monkton Aquatic Centre as a Lifeguard and am still doing this work. I do most of my personal training with clients at TAS.

Some advice to anyone trying to rehabilitate from an injury: Just listen to the therapists, as they are the professionals. If they say this is the way to get you better then do it! I wasn’t perfect in doing all my rehab but I did most of it.

And after that….. just keep going!! I think it’s important to keep trying to improve yourself but it’s also important to recognise when something is just not going to work. I tried to return to being an athlete for about 3 years until I realised I was never going to be as good as I had once been. I recognised it wasn’t going to happen and made a decision to find something else to do and another direction to go in.

So… to the here and now…. I have plenty of work on the go. My home life is wonderful, and I got married in 2005. I own my own home…. life is pretty good actually. It was a long, hard road, I just kept going. 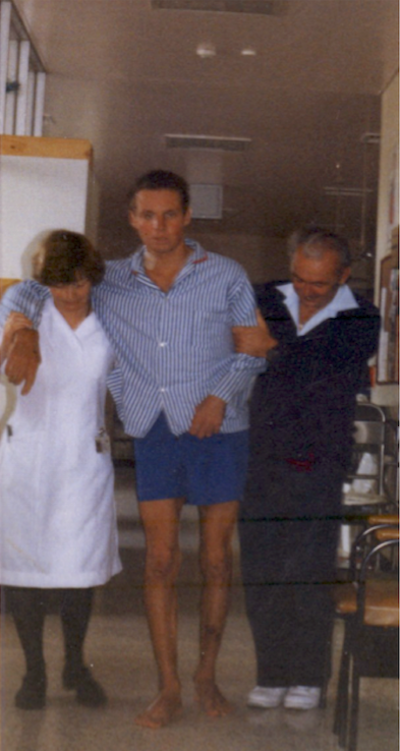 First steps in hospital after the accident 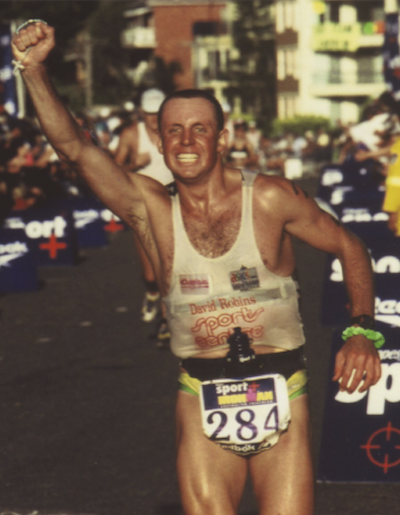 Completing first marathon after the accident.